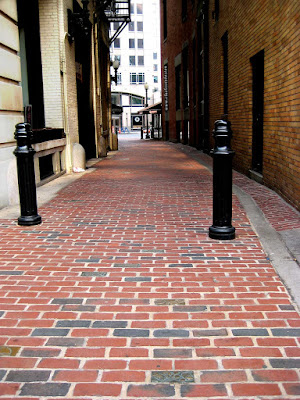 Winthrop Lane connects Otis and Arch Streets in downtown Boston near Winthrop Square. It's a narrow, brick-paved passageway between two old buildings, but look down as you walk and you'll see 102 brick-shaped bronze bas-reliefs set into the bricks. These bricks were designed by Gregg LeFevre and Kate Burke, and depicts a different aspect of the city's history, culture, and events. For example, there are bronze bricks depicting the Molasses Flood of 1919, Paul Revere's Ride, the Boston Massacre, Boston Pops, Boston Common, Boston Red Sox, the State House, Franklin Park Zoo, and many more.

The copper alloys were chosen for the bricks not only for their esthetic appeal but also for their durability. Passersby who walk on the bricks actually keep certain raised elements buffed and shiny, which was planned by the designers. However, the raised portions can’t be raised more than a quarter of an inch higher than the surrounding pavement, according to the Americans With Disabilities Act. The brick-shaped bronze sidewalk plaques were cast by a now defunct foundry in Bedford, Massachusetts.

Tomorrow I will show you some of the bronze bricks depicting historic events that have taken place in Boston.
Posted by Clueless in Boston at 12:01 AM