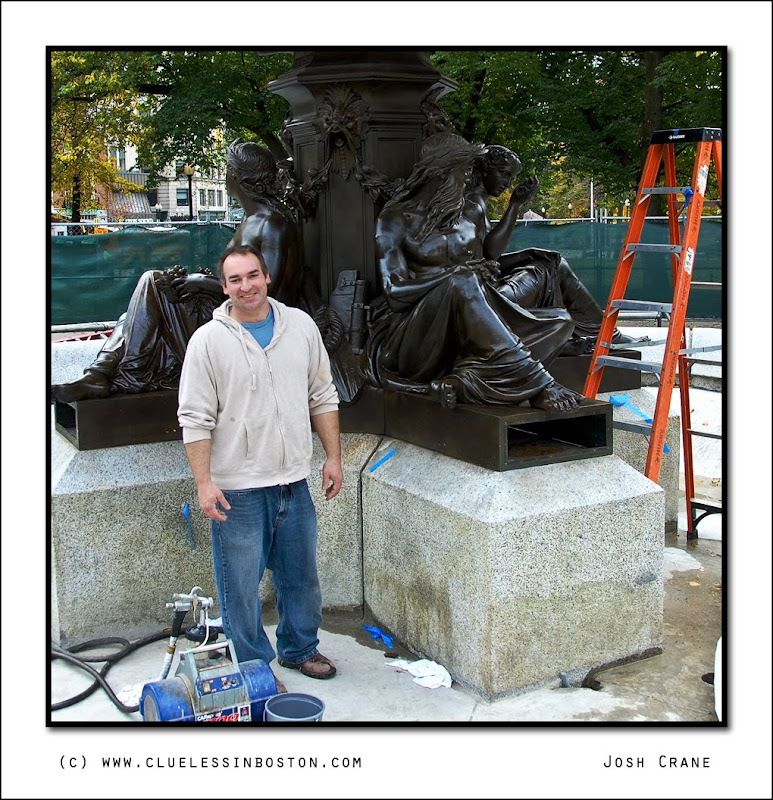 This is Josh Crane who has been working on the restoration of the Brewer Fountain on the Common for the past few months. The re-dedication for the fountain is scheduled for Spring 2010. The restored fountain will have water and lights, which will be a first in my recollection of the fountain.

Josh told me there are ten similar fountains he came across in his research. The last time the Brewer fountain was taken down and disassembled was in 1920's when it was moved to its current location.

The Fountain was the first piece of public art on the Common and was donated by Gardner Brewer in 1868. The fountain is a bronze replica of a French original that won a gold medal at the 1855 Paris World’s Fair. The figures represent mythological figures associated with water: Neptune, Amphitrite, Asis, and Galatea.
Posted by Clueless in Boston at 12:59 AM

I've already seen this fountain, probably in your posts, but didn't know it was inspired by a french original. Do you know if this fountain still does exist?
Great post, I love fountains, keep us ap to date with this wonderful piece of art.

Josh is an artist because it's not easy to work with delicate details in some restoration, and he has a peaceful and beautiful smile!
Now I'm curious about the French fountain!
Have a nice weekend sweet friend.Any snow in Boston?
Here I'm really anxious waiting for some snow!The weather here is so different of Brazil!
Léia :)

I used to have a blog with fountains, but had to close it, 4 blogs was too much..I wonder where the french fountain was!I'm glad you're doing the 100 strangers serie again!You always offer nice and interesting encounters!

Good on him for the good work! Great capture from you!

He's doing a good job of cleaning it up, sometimes bronze can look too clean, hopefully it will assume a nice patina in a couple of years, but I guess the water must play havoc with it as well.

So interesting, the contrast between the real man and the mythological god.

What a cool way to make a living. Looks like he is doing a nice job, too.

A fine portrait of Josh.