A bird in hand 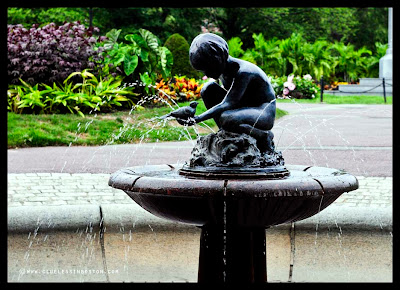 Bronze sculpture on a granite base of a small, nude boy crouched and holding in a bird in his left hand. He is kneeling on a rock formation out of which water spouts. The sculpture is mounted on a pedestal in the shape of a bird bath. The pedestal is attached to a large granite pool. The sculptor was Bashka Paeff, known as the Subway Sculptor for her work on the Park Street Subway station. The sculpture was originally created in 1934, cast in 1977, and a second recast in 1992. It is located near the Arlington Street entrance.
Posted by Clueless in Boston at 6:11 AM

Another example of wonderful gardens in the city.

A bird in the hand is worth two in the bush ;)

What a wonderful fountain! Boston has many treasures.

It's a beautiful sculpture, and the park looks inviting!

To use something as heavy as bronze, and to make something as light as a bird on a child's hand...I love the sculpture, and admire the artist.

It's a lovely sculpture and fountain.

Nice ART in a nice place!:)