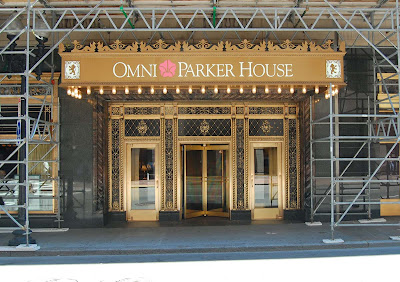 The Omni Parker House is the oldest continually functioning hotel in America (1855) and is one of only two hotels on the Freedom Trail. The Parker House is noted for its Parker House rolls and Boston Cream Pie, the official dessert of Massachusetts. It is currently undergoing major renovations to the outside of the building, which is sheathed entirely in scaffolding and netting.

The Parker House is also notable as the first Boston hotel to have hot and cold running water, and an elevator; for having Ho Chi Minh work there as a busboy, and Malcom X as a waiter. Notable vistors to the hotel have included English writer Charles Dickens, and the not so notable John Wilkes Boothe. Boothe stayed at the hotel the week before assasinating President Lincoln.

I like the ambience of the dining room and bar: it's all dark wood and comfortable chairs that can make you forget you are in the center of a busy city.
Posted by Clueless in Boston at 7:27 AM

great post, very interesting--would love to see a photo of all that dark old world wood in the bar