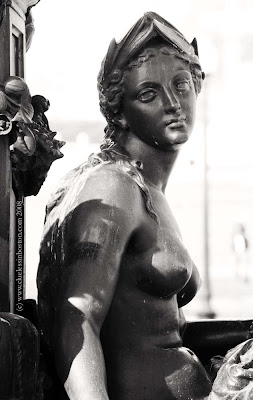 The first International Women's Day (IWD) was observed in February of 1909 in the United States following a declaration by the Socialist Party of America. Among other relevant historic events, it commemorates the Triangle Shirtwaist Factory fire (New York, 1911), where over 140 women lost their lives. Today IWD is more strongly identified with Russia and its former eastern bloc allies, but it is also considered the first day of the spring season so it is well worth observing on both accounts.

In honor of International Women's Day, I am showing the second of two female statues from the Brewer Fountain on Boston Common. You can see the other statue here.
Posted by Clueless in Boston at 12:01 AM

Beautiful statues! I had no idea that today was designated as such.

I have something to add on the historic's of IWM.

CHk out this link..

International Women's day is very big here in PNG (with the women) but they are still treated appallingly. They are second rate citizens because there is still bride-price which means men think they own them and treat them as belongings - domestic violence is endemic and AIDS is beginning to take hold. Not good news at all!!!

She's just beautiful and a perfect choice for today. I hadn't realised it was International Women's Day until seeing Fabrizio's Posting on Torino DP. Just found your tribute and it's just lovely. I've posted on the subject too - on Menton DP.

Lovely. And one can see the similarities.

Thank you for this International Women's Day tribute.

I had no idea about today being IWD ... thanks for the heads up. I've enjoyed seeing this fountain when walking through the Common. Didn't know the history, though. Guess you could call me "clueless from Seattle" -:)

thanks for this nice post on IWD...and really nice photo(s)--as always...

Tell me why she's naked! :D

Thanks for visiting Norwich Daily Photo and for the birthday wishes. I am very touched by your thoughtfulness. Sorry for the late reply - as I spent my birthday and the day after painting our new home and didn't come home until past midnight.