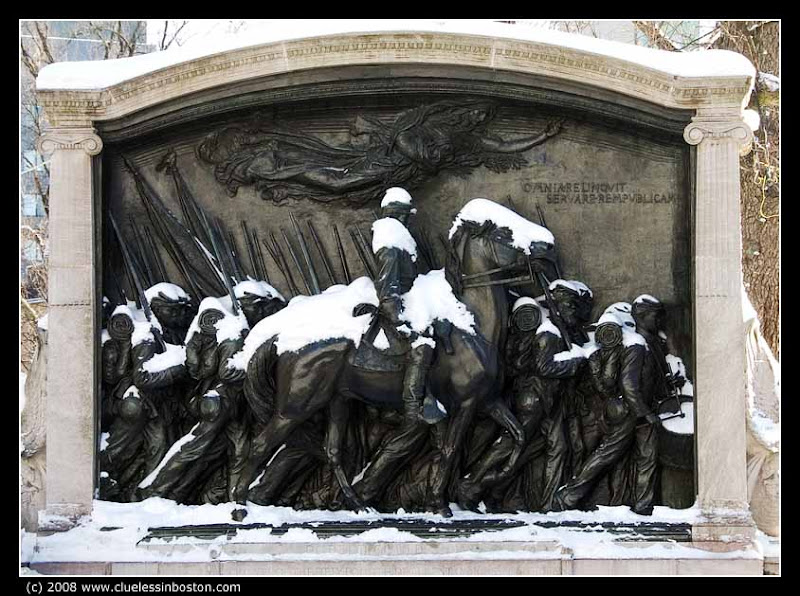 Across from the State House is the Robert Gould Shaw Monument built in 1897 in honor of the Massachusetts 54th Regiment, the first all-Black regiment recruited in the North to fight for the Union army during the Civil War. The monument by Augustus Saint-Gaudens is part of the Boston Black Heritage Trail. A famous composition by Charles Ives, "Col. Shaw and his Colored Regiment," the opening movement of Three Places in New England, is based both on this monument and the regiment.
Posted by Clueless in Boston at 12:11 AM

What a great photo!

Must have been a cold and tough walk through the snow. From an aesthetical point of view the white contrasts very nicely with the black though.

Even after all these years, trudging through the snow.

With its golden dome, Massachusetts's State House is very beautiful. Been there there three times, and this relief across it is one thing I remember about the Boston Common.

HAPPY NEW YEAR to you too.

Hey! It's good to see a Boston Daily Photo blog. I'm up in Cambridge myself - wish I had the time to dedicate to a Cambridge one. Keep up the good work!

Awesome capture with the snow!