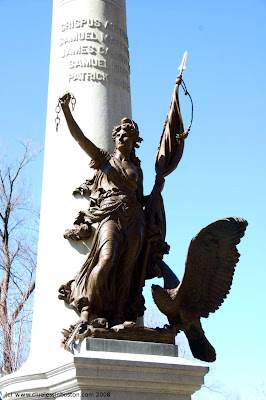 The monument consists of an allegorical female figure representing the Spirit of the Revolution standing atop a granite base in front of a tall granite obelisk adorned with a band of thirteen stars around the top. The female figure is loosely draped and holds a furled American flag in her proper left hand. Her proper right arm is raised and in her proper right hand she holds a broken piece of chain. Beneath her proper right foot is a broken British crown. An eagle ready to take flight is perched by her proper left foot. On the base, beneath the female figure, is a bronze relief plaque depicting the Boston Massacre. It shows five men, Crispus Attucks, Samuel Maverick, James Caldwell, Samuel Gray, and Patrick Carr, slain by the British soldiers in front of the Massachusetts State House. The hand of one victim and the foot of another project from the surface of the relief. The hand is brightly polished by visitors who think they are shaking the hand of Crispus Attuck.
Posted by Clueless in Boston at 8:27 AM

Beautiful monument.
How far are you from Deerfield? My ancestors were taken in the Deerfield Massacre.

Thanks Southern heart.
Tanya - Deerfield is a little more than two hours from Boston.