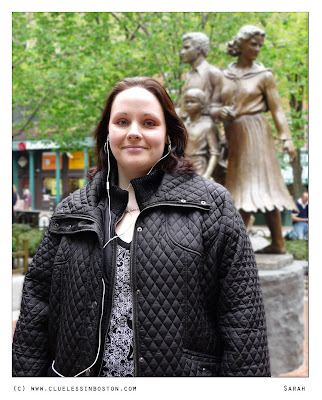 Sarah, with the Mona Lisa smile, was waiting for her friend Carol when I met her outside the Borders Bookstore by the Irish Potato Famine Memorial. Sarah told me she is an animal lover and was enjoying watching all the pigeons, as some were variously resting on the ground and others perching on the statues. Not surprisingly, Sarah told me she was an animal lover; and works nearby.

This is my first official post of a portrait of a stranger. It is difficult to overcome shyness and approach a stranger and ask to take their picture. It took me a long while to get up the courage to even consider such a project for myself. One wag said he simply bought a zoom lens, case closed. But I wanted to see if I could do it - talk to people and ask if I could take their picture.

I have been inspired by many, but especially Steffe from Haninge, Sweden and his Strangers No Longer Project; as well as a group of kind Australians who have encouraged me and have a blog for their own 100 Strangers Project, and Saretta who just started her Molfettan Faces this past Saturday. And finally, here is the link to the original 100 Strangers Project on Flickr.

Sarah is my first, and I hope not my last. Did I spell your name right Sarah?
Posted by Clueless in Boston at 12:01 AM

I still can't do it so thumbs up to you! It's a gorgeous portrait (but how can anyone like city pigeons???)

she does have a sweet smile.

good on you for taking up this project!

Good job! I like the portrait and am honored that I had some small part in helping you take the plunge! Keep up the good work!

Congratulations!This post is wonderful and Sarah is very cute!
Léia

I like your project!Sometimes I see wonderful or interesting faces, but I never dare myself to ask people if they would agree for a picture. But I admire people who are able to do it; If you come to my main blog (Fragments bleus) you'll see a link to "People Reading". That's a fantastic blog where the girl takes pictures of people who are reading, and she always talks with them.I hope you'll succeed in that project, it's gonna be very intresting, for you and for (the shy of)us!

Good luck! Looks like you are off to a great start. Bet you will have lots of stories to tell in upcoming days and weeks.

That is a great idea! I would be shy of taking pictures of (let alone approaching) a stranger with my camera. I like the whole idea.

Well, well ... expect to see the next portrait...
This is very beautiful without even the pigeons!

Looking at faces was a favorite hobby when I lived in Boston.
People are so interesting.

I like the statue that you used in the background. Sarah was dressed perfectly for this unexpected photo opt: dark jacket to complement her dark hair. Great smile.

Ohhh, this is really difficult...
I am afraid that in Greece people would be annoyed if anyone asked to photo AND post them in the internet... And I am not willing to try to see if what I believe about people here is true or not.
But I do like very much this project of Steffe, and yours now. Keep on.
I hope I will overcome my shyness and try it here, some time.

Bravo.
I never did it and don't know if I could do it!!
Sarah has a beautiful smile.

So true. Just the other day I was thinking about asking someone if I can take their photo, and chickened out. On the other hand, last weekend we were out on a photo shoot of a release of raptor birds, and just scrolling around with the telephoto lens I spotted a lady waving at me and my fellow photog Mitch. At first I did the look around us to see if she in fact was waving at us, but then realized she indeed was. She then sat there on the picnic bench and just smiled at us. I think I'll put her photo up sometime this week.

Well having about 70 strangers under my belt, I say , "BRAVO" ! The first are the hardest, thus the challenge. Keep it up,it gets easier. I'm not that intimidated by strangers. I'm from the south, we talk to EVERYBODY, but complete strangers on the street are hard at first. Keep at it. It gets more fun as you go. This is a great start. Let me know if I can help you. I have my strangers on my website. Got to my blog and there's a link.
V

Good for you! Breaking out of any habitual comfort zone is scary. The more you do this the easier it becomes (voice of experience). Nice first! Anticipating the next 99 LOL!!

Well done! She really does have a terrific Mona Lisa smile and such a pretty, bright face. I really like that you found out a bit about her. Does she like the photo?

Well done! I am glad you have your first in the can. It is such an achievement as you can see from all the comments from folk who would hesitate to follow suit. I just know that you will enjoy this project the more photos that you take.

You have certainly started off with a lovely photo of Sarah. I am so pleased for you ...

Great to see and read. I'm glad I inspired you a litlle.You will be finding it a bit easier as you get used to approaching people. I still get a bit nervous even after shooting around 180 portraits, but that's only normal I think. It's a good start and I will be keeping an eye open for your next stranger.

Good job! The girl is so nice and you 've been brave to ask!