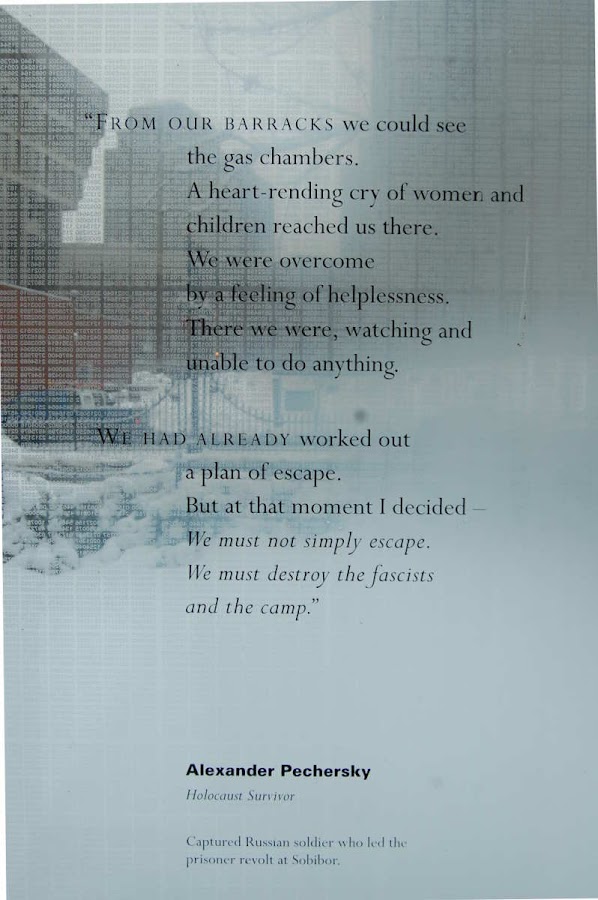 Inscription on one of the glass towers of the New England Holocaust Memorial. The numbers you can see inscribed in the glass are the numbers of the inmates at the camps.

"From our barracks we could see the gas chambers, A heart-rending cry of women and children reached us there. We were overcome by a feeling of helplessness. There we were watching and unable to do anything.

We had already worked out a plan of escape. But at that moment I decided -- we must not simply escape. We must destroy the fascists and the camp."

Alexander Pechersky
Holocaust survivor
Captured Russian soldier who led the prisoner revolt at Sobibor
Posted by Clueless in Boston at 12:01 AM

Quite poignant. My father-in-law, who served in WWII and saw one of those camps, today tells school children to never forget that the Holocaust was real, that he was there at the end of it and saw the gas chambers and starving prisoners.

I congratulate you for this post!
It should not be forgotten!

All the best
Lachezar
http://www.aucklanddailyphoto.com/

Thank you for this photo. I agree with Lachezar and Rambling Round. I've taken Mississippi high school students to Dachau for that very reason.