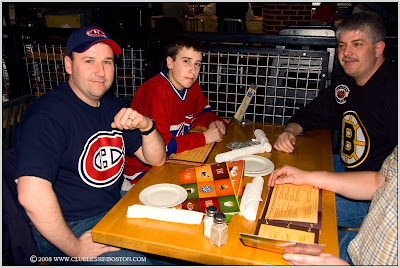 The Boston Bruins faced off in game 3 of the playoffs tonight at the Garden. Prior to the game I was at Boston Beer Works on Canal street and the place was full of supporters of both sides, though I must say the Canadiens fans seemed the most boisterous and were having the most fun. Their team was leading the series 2-0, so they had every right to feel pretty good about themselves. The table behind us was a table of supporters of both teams and they were getting along pretty well and keeping things in perspective.

For the record, the Bruins won the game by a score of 2-1, which is also how the series stands.
Posted by Clueless in Boston at 12:01 AM

Go Bruins! And it's nice to intermingling of the fans withour bloodshed! Nice shot!

Nice post here, Clueless. Of course, I'm a fan of all Boston teams, but I haven't been following the Bruins. My son was a high school goalie, so I've seen a lot of hockey and frozen my butt off in a lot of rinks, lol.