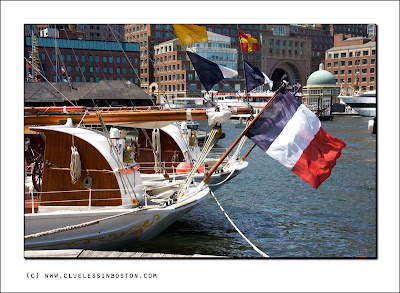 Happy Bastille Day! This is a French flag on the square topsail schooner Étoile from France. The Étoile and her sister ship La Belle-Poule were in Boston as part of the Tall Ship Atlantic Challenge 2009.

The two 124' ships are French naval schooners used as training vessels in the French military. Their home port is Brest, France. The sisters were both launched on February 8, 1932 as replicas of a type of fishing vessel, which was used off the coast of Iceland until 1935.

Both the Étoile and the Belle Poule joined the Free French forces during the Second World War, a deed for which they are still honored by flying the French flag with the cross of Lorraine.

Two of the crewmen. One from the Étoile and one from La Belle Poule. 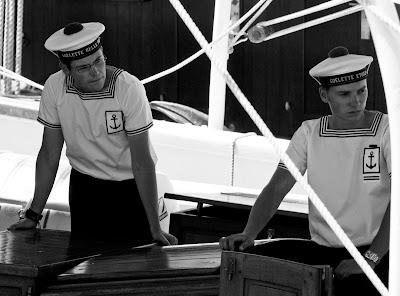 A map of the voyages of the sister ships during the Tall Ships Atlantic Challenge. 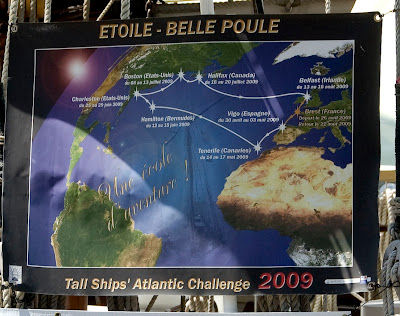 As you can see if you enlarge the map, they have been at sea since April and do not return home for another month. A great adventure and learning experience for the young sailors.
Posted by Clueless in Boston at 12:01 AM

It's so good to hear about my country with American accent!!
I visited those two ships many times, as they take part of each great ship meetings everywhere; My grandfather, my father and my husband wore this beloved sailor uniform !
Thank you for this lovely post!!

Oh what fun! I love the sailor uniforms.

Great post! Particularly love the b&w of the sailors.

Must be quite an honor to be chosen to be a member of the crew.

Looks like it was a beautiful day. I love the photo of the two sailors in exactly the same position!

What an adventurous trip! Sounds like a lot of fun and learnings for the young sailors. Ship ahoy!

Those are gorgeous ships and the history is very interesting and I thank you for this post!

What a fascinating challenge!

I missed this post just on Bastille Day, great story I have to find more about these ships.

Do you know that touching the red "pompon" on their Navy hat is supposed to bring good luck!!

Hello sailor! ;) Great pictures. I'm not sure I'd want to sail all that way, I doubt I have the sealegs for it!
Jackie