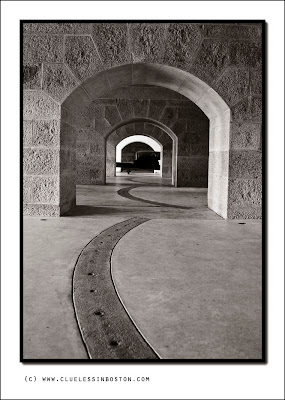 Cannon seen from a few cannon rooms away. As you can see most of the cannons have been removed from the fort. Apparently most were melted down for scrap during the Second World War and the ones currently in the fort are replicas. The holes in the floor were for the carriages used to swivel the guns. Each gun was manned by a 12 man team that lived in a room behind the cannon.

Below, you can judge the size of the cannons in comparison to the two people in the picture. The photo on the right is a full side shot of the cannon. 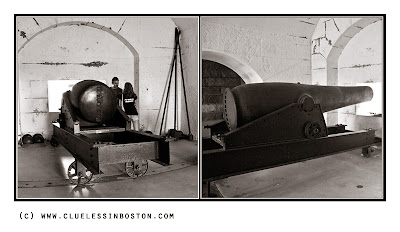 Posted by Clueless in Boston at 12:14 AM

Email ThisBlogThis!Share to TwitterShare to FacebookShare to Pinterest
Labels: B+W

Nice shot at the top, I like the arches and the curves on the floor. I went to Fort Sumpter some years back, they have similar cannon. I must dig out a shot I have of the big breachloaders on HMS Warrior in Portsmouth. These are large 19th century naval pieces.

Very interesting information about the cannons. But wow, the soldiers had to live near their cannons? Must have been a very difficult life.

Your first photo is fantastic!

These images really lend themselves to b&w. That first shot is outstanding. But I love the lower pair two ( :

I wonder if they wore any kind of ear protection? Probably not.

Love today's cannon, from a few rooms away. Wonderful composition.

Those are huge cannons! They must have been very loud too.

Beautyful perspective in your first picture.
It's always impressive to see how military things can develop human genious in architecture, ways of life, weapons of all kinds and sizes...

The history is interesting. The first shot is eerie, I don't quite know why I think I'm going to die!

The first photo is wonderfully composed in its symmetry and colouring. To me it has a very quiet and soothing mood - ignoring the cannon of course, ;-)

Very cool perspective ... love the curve of the track leading through the arch.

Love that top shot with the curve leading you in and very informative narrative.

Clueless, all I can say is that you are a real pro at black and white. You've got it figured out! I want to follow that path, for sure!