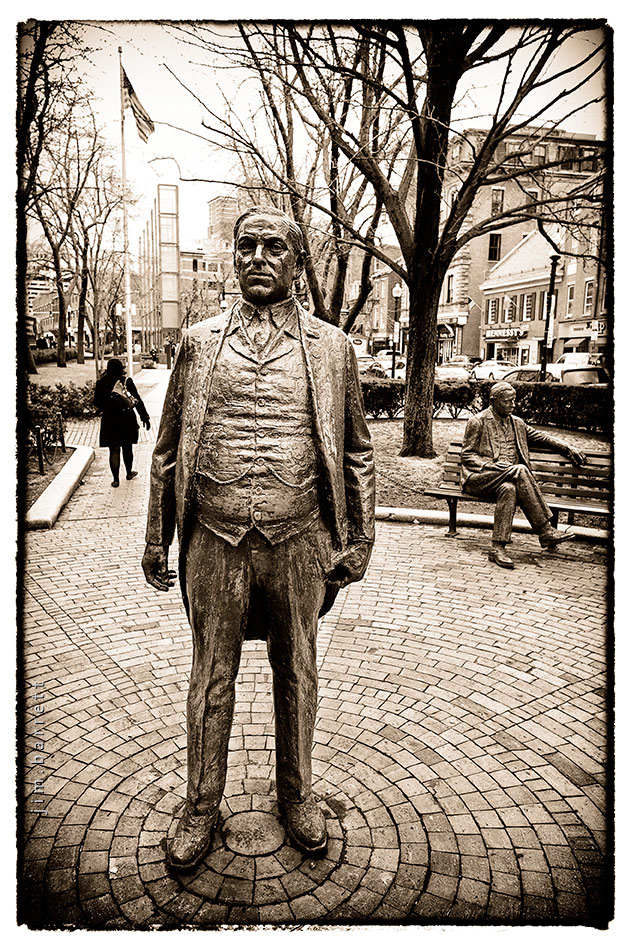 James Michael Curley, by artist Lloyd Lillie, on Congress Street, along the Freedom Trail in Boston.

One of the most colorful figures in Massachusetts politics in the first half of the 20th century, Curley served four terms as Democratic Mayor of Boston, including part of one while in prison. He also served a single term as Governor of Massachusetts

Curley became famous when as he was elected, in 1904, to the Boston Board of Alderman while serving time in prison on a fraud conviction. His colorful career included an indictment for influence peddling in 1943. He won a fourth term as mayor of Boston in 1945; despite a second indictment by a federal grand jury, for mail fraud. In 1947, he was sentenced to 6–18 months on the mail fraud conviction and spent five months at the Federal Correctional Institution in Danbury, CT before his sentence was commuted by President Truman. He was defeated for mayor in the 1949 election, thus ending his long political career.

Curley is considered the inspiration for the protagonist Frank Skeffington in the novel The Last Hurrah by Edwin O'Connor, on which director John Ford based his film with the same title.

Posted by Clueless in Boston at 4:25 PM

Nice photo, Anyone wanting to know about this character could read "The Rascal King" by Jack Beatty. A good read

Amazing craftsmanship in that brick pattern. Sure do appreciate your photos. Well Done!!