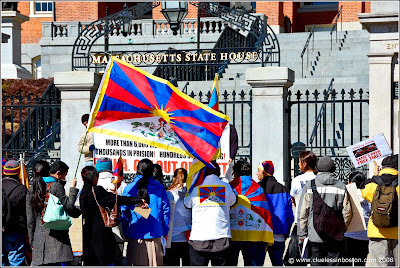 March 10th marked the 49th anniversary of Tibetan National Uprising Day. The day when Tibetans took to the streets of their capital city, Lhasa, to protest China's invasion and occupation of their country. One week later the Dalai Lama was forced to flee to India. In the months following his escape, tens of thousands of Tibetans were killed as Chinese troops brutally crushed the uprising. You can read the report of the uprising by the Tibetan Government in Exile here.

The sign held by the demonstrators, partially obscured by the Tibetan flag reads, "China's record in Tibet: More that a million killed, more than 6,000 monasteries destroyed, thousands in prison. CHINA OUT OF TIBET!"

Posted by Clueless in Boston at 12:01 AM

This was an interesting post...I knew nothing of this, and learned something new today.

I hope that one day people of Tibet will be free to have his own State ...