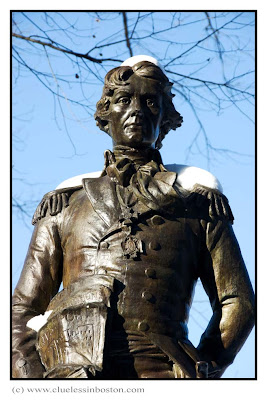 Have a great weekend everyone!
Posted by Clueless in Boston at 12:01 AM

Good old Tadeusz Kosciuszko! In downtown Los Angeles there is a very short street named after him near the business district that I used to pass on my way to work. I'm sure they realized they could only give him a block because no one could spell it.
If you have time neighbor, please stop by my new blog at Sudburydailyphoto.blogspot.com. I also include Lincoln and Concord. Let's face it, we don't have all the photo ops you do in Boston.

wow, how nice is to see Polish national hero at Your blog

Great shot and fantastic info, thank you. Amazing how you bring these statues to life, statues I must have walked by a thousand time and never even noticed.

Re: the lighthouse. It is not a functional lighthouse and was designed to be a decorative addition to the Lake Front, along with the peninsula it resides on - one of the great things the City Of Kissimmee has created.

Yes I learned something today!!
The name was familiar I hear it all the time on the radio that Kosciuszko bridge in the Queens is always stuck in traffic!! but had NO idea the guy was a little French!!

Commemorations to Kosciuszko extend as far as Australia, where every school child learns that the tallest mountain in Australia is Mt. Kosciuszko. The Polish explorer Pawel Strzelecki (after whom the nearby Strzelecki mountain range is named) named the mountain after his fellow countryman Tadeusz Kosciuszko